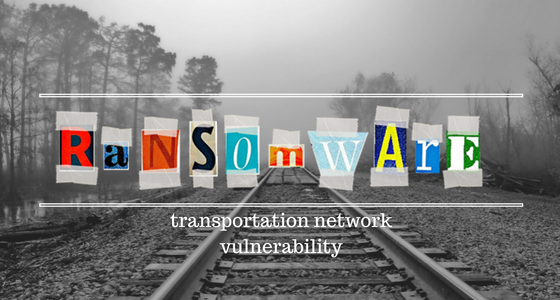 Ransomware, an attack that has been around in some form or another since 1989, is one of the biggest cyber-crimes of 2016. Instances of this attack have quadrupled in number during 2016 from the same time period last year, and while some are hopeful that these rates will decrease in the coming year, ransomware has expanded its grasp to reach almost every industry out there. It’s latest target? Transportation networks. More precisely, San Francisco’s Municipal Transportation Agency.

San Francisco’s Municipal Transportation Agency (SFMTA), was hit last Saturday with ransomware. The attack actually began the night prior as SFMTA reported that agents’ computer screens displayed the message “You Hacked, ALL Data Encrypted.” These broken English displays and emails, received from a Yandex address, a Russian email provider, led the company to believe this attack was carried out by foreign hackers, however, they are not certain about that at this time. Whoever these hackers might have been, they requested payment of 100 bitcoin, equal to approximately $70,000, as ransom for the safe return of these encrypted files. However, the transportation agency took the FBI’s recent advice to those hit with ransomware and did not pay the ransom. Paul Rose, a SFMTA spokesman said, “We never considered paying the ransom. We have an IT team on staff who can fully restore all systems.”

Rose also stated that after investigating further, it has been determined that the hackers didn’t steal any financial records or other potentially damaging information about their customers or employees. This was extremely lucky for the transit system, as ransomware is often used to steal highly sensitive data from its victims. While there were disruptions to the system operations, in an attempt to avoid mass chaos, SFMTA decided to run their buses and light rail vehicles regardless, an added gift to riders of the ‘Muni Metro’ light rail as their fares were waived during this time. These free rides are, thankfully, the only major cost to the transit agency from this attack, and as of Monday, SFMTA was still trying to determine the magnitude of this financial damage.

Though San Francisco’s Municipal Transortation Agency was rather lucky despite having been hit by ransomware, this attack should be a wake up call for all transportation networks to amplify their cybersecurity measures.

While San Francisco was fortunate in that this attack did not result in any disruption of their services, other transportation networks have not been so lucky. In 2008, a Polish hacker succeeded in derailing four vehicles after hacking into his local town’s transit system, injuring a dozen people, though thankfully killing no one. While not many cases of cyber-attack exist within the transportation world yet, the transportation industry is highly susceptible to attack, as is clear below in PhishMe’s 2016 Phishing Susceptibility and Resiliency report. 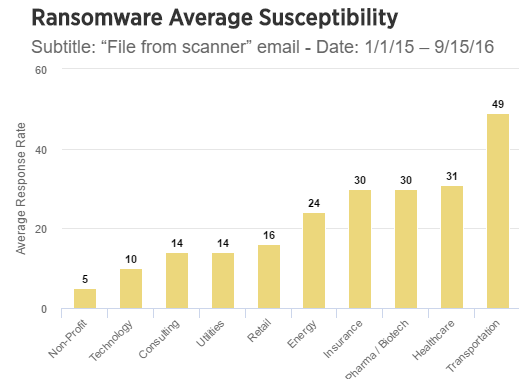 While cybersecurity can be an intimidating hurdle for any industry, it is especially important for companies like railways, whose entire operations would be derailed without the use of technology, to be strong in this area. As is true of every sector, there is no silver bullet to enhanced cybersecurity; multiple steps need to be taken in order to be strong against attack. By taking these simple steps, among others, transportation networks can be strong against cyber-criminals.

By combining multiple, simple steps, cybersecurity becomes less threatening and much more manageable for companies across all industries. Implementing these tips as well as others and learning from similar networks’ security errors will result in transportation networks decreasing their vulnerability against attacks, such as ransomware.